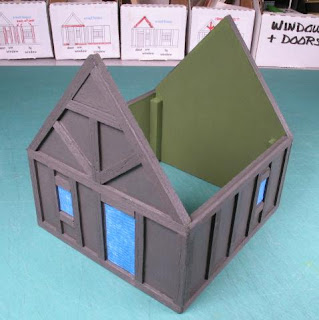 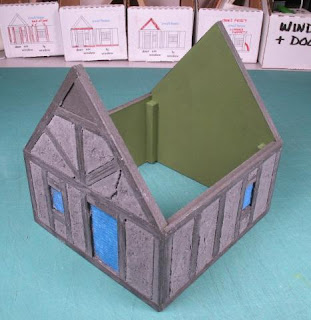 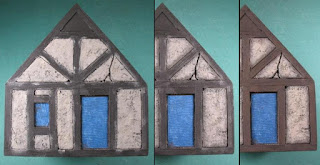 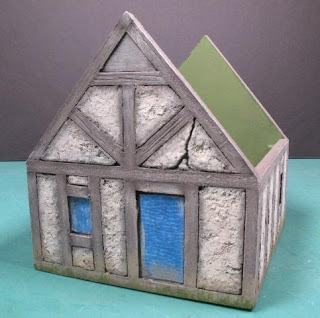 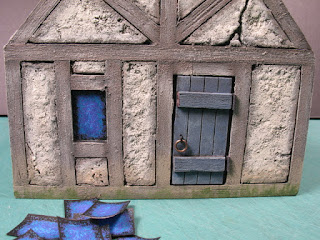 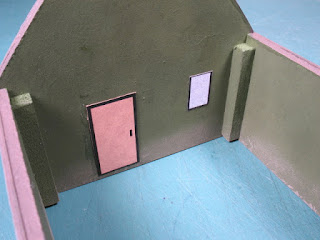 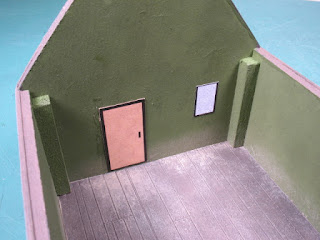 NEXT: Roof, base.
No comments:

INTRO
It’s been a long journey but here we are at last. We actually get to use all that knowledge and MAKE something!. And if you haven’t read the TOOLS section and the METHODS sections on SPACKLING, CHIMNEY, and SHINGLING, do so now. I’ll wait. It will save you tons of time if you are already familiar with the processes and don’t have to refer to them as you go along. As a note, they were put into separate sections so I can refer to them during future projects.

Remember, this is just how Darrell Empey does it. (Your name here) may decide that all this dealing with MDF is too much of a pain. OK, just use Foamcore. And maybe just dab on the spackling between the timbers instead of toweling it on. Do what works for (your name here).

So here we go…

Lord Froglips has asked me to make a small cottage for his vassal, Chumley. Follow along as we construct this basic pseudo-Medieval building.

HERE’S THE BIG PAYOFF AT THE END... 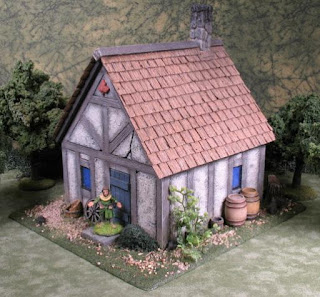 I use standard tools, glues, craft paints, terrain supplies, and previously finished details from my bits box. There are a lot of steps but none of this is difficult, it just takes time. 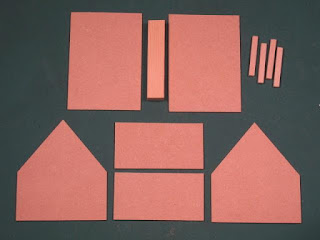 Here are the building and roof pieces I cut on my scroll saw (see TOOLS). I use 1/8 inch Multi-density Fiberboard (MDF) for the shell, roof, and base.
The roof pieces are 5-¾” x 3-3/8”.
The ridge piece is cut from a 3/4” thick piece of shelving stock at an angle to match the front/back peak (photo below). To me, a 45 degree peak angle doesn’t look right. It is 4-7/8 inches long.
The interior supports are ¼ inch square stock, 1-15/16 inches long (for 1/16” floor clearance).
The building end pieces are 4 inches wide with 2 inch sides and 4-1/2” to the peak.
The base (not shown) is optional and discussed later. 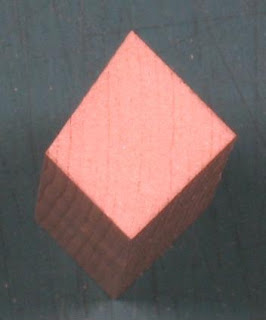 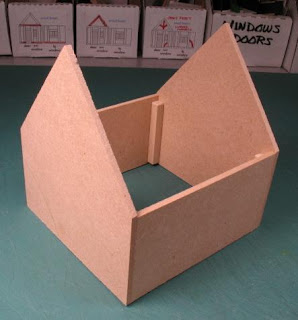 The shell gets glued together with wood glue. Note how the ends align with the sides and that clearance is left for a 1/16 inch thick floor I’ll be making. 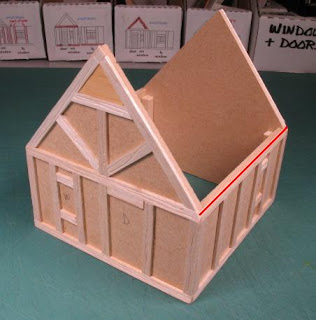 Next, the timbering is glued on. I use 1/16 inch sheet balsa cut into 3/16 inch strips cut to length (see TOOLS). When dry, the upper timbers on the sides are sanded to match the roof angle. 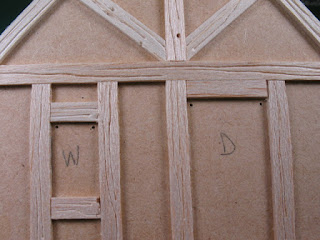 For interest, timber cracks and knotholes were made with an awl/nail, then tiny pin holes are drilled near the top corners of the windows/door areas for alignment of the inside windows and door later.


NEXT: Filling between the timbers, painting, windows, doors, floor.
No comments: 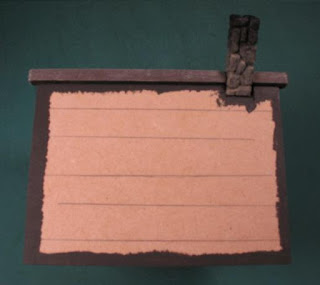 The basic unshingled roof, painted and with its chimney. Photo is obviously out of focus (like me most of the time). The horizontal lines are random and help my old eyes keep the strips lined up. 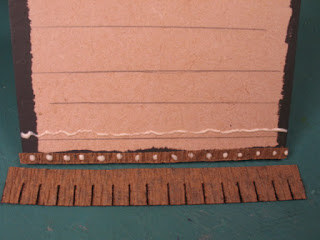 Let’s glue on the strips. Take a pack apart, discarding its staple and pull tab. Cut each strip to approximate length but save the scraps!
Remember those 1/4” strips you cut earlier? Glue one to the bottom edge of your roof and trim it to length. Using a strip as a guide, run a glue line about 1/4” from its top edge and put little dots of glue where the first strip goes and glue it down. Note the dots go in the center of each shingle for this row only. The strip should overhang the bottom edge by 1/8“. 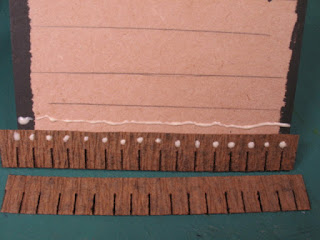 Using the same idea, glue the next strip on the upper part of the previous, but the dots are at the top of previous row’s slots… 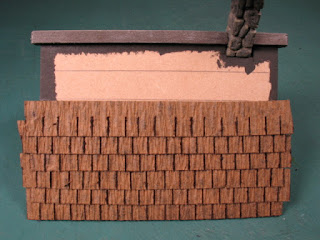 The strip just covers the top of the slots, and is offset from the one below it (exposed shingles are about 1/4“ by 1/4“). Continue up the roof to the top. Here we’re over halfway done. 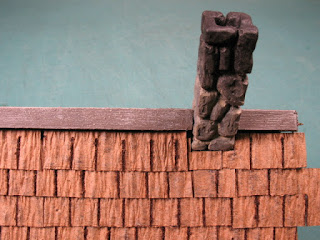 The topmost shingles are trimmed to fit. Don’t forget the area around the chimney! 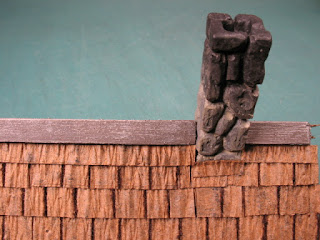 Another 1/4“ strip was used to “finish” the edge. Trim the shingle ends so there’s a slight overhang and TA DAA! ALL DONE! When you’re done crunching down another cookie do the other side.

QUIZTIME! Take another look at the completed roof at the beginning of all this (HG SHINGLES 1). Did you notice that scraps were used on the 7th and 8th rows from the bottom? I didn’t think so. Me neither.
There you have it! Go shingle some roofs!

BONUS! INDIVIDUAL SHINGLES
If you’re planning on making just a single building or two with a shingled roof and don’t want to go to all of the trouble of making a jig and cutting strips, here’s how I do it: 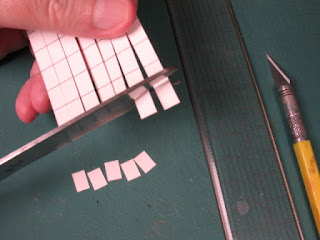 I use the Tree Wrap material but for this demo photo I‘m using thin card for clarity. First, draw horizontal lines 5/16” tall. Then cut vertical slits 1/4“ apart with an Xacto knife, but NOT quite all the way to the top. Lastly, pick the whole thing up and, starting from the bottom, use scissors to cut the shingles apart. VOILA! A pile of shingles. Undercoat your roof dark brown and glue the shingles to it, overlapping each row so the exposed shingles are around 1/4” square. 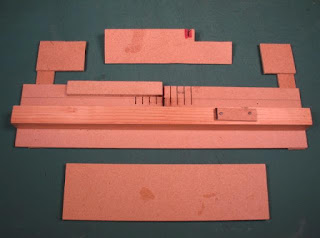 The jig for cutting slots in the shingle packs on my band saw. The separate piece at the top holds the pack down and reminds me not to cut off a finger. The piece at the bottom gets temporarily attached to the underside of my sliding table, acting as a stop so the slots will be a uniform 5/16“ deep. 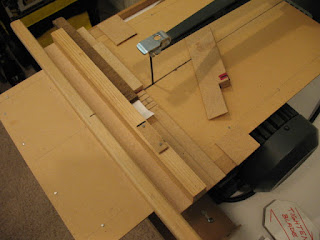 Time to cut the slots. I use a fine tooth blade when cutting shingles. The photo shows the jig clipped onto the sliding table I made for my scroll saw (see TOOLS). The first cut is about to be made, just needs that hold down piece. The staple is the right of where the cut will be. The process is simple…. 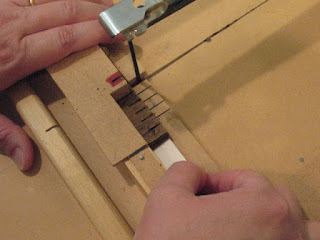 Cut and pull, cut and pull: Hold the strip pack down with pressure, cut a 5/16 inch deep slot, release the hold down, slide the pack to the right 1/4“ using its tab, check alignment, and repeat. This is one of those things that goes quickly and is easier to do than to explain. 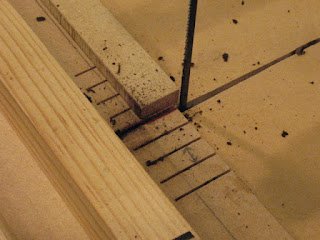 After all the slots in a pack have been cut, there’s a lot of tar residue. Look closely and you’ll see the blade is gucked up as well… 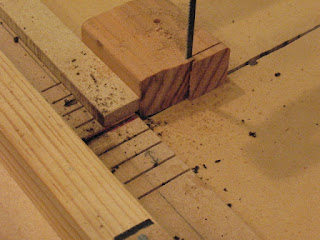 I clean the blade by cutting through a scrap piece of hardwood, clean the cutting slot with an old Xacto knife blade, then dust the area off.

NEXT: Gluing ‘em on the roof and making individual shingles.
No comments: 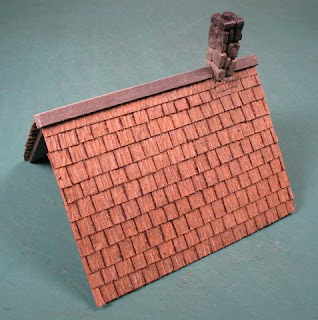 WHAT IT’S ALL ABOUT: If you plan on shingling any quantity of roofs at all, you definitely should use this technique developed by Legendary Master Herb Gundt of HG WALLS fame. He shared it with me many years ago (as well as having it published in Wargames Illustrated) and it’s saved me countless hours of effort. It’s MUCH easier to glue on strips of shingles than to glue each one on individually…..one… at… a… time (=zzzzzzzzzz). 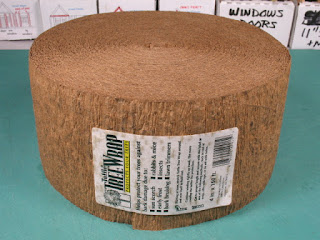 The first thing you need is the right material: Tree Wrap! Mine is made by Drainage Industries, 300 N. Lilas Ave, Appleton, Wisconsin 04514. Check the Internet for where to buy it. Basically it is a thin layer of tar trapped between two layers of thick brown crinkled paper (=no painting necessary!). This roll is 4 in. wide and 150 FEET long. That’s a LOT of shingles, my friend! 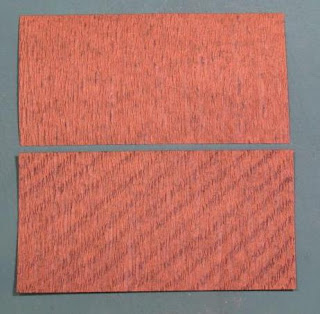 Cut 8” strips using a paper cutter, then mark the back of each with a marker since the front side and back side are a slightly different shade. 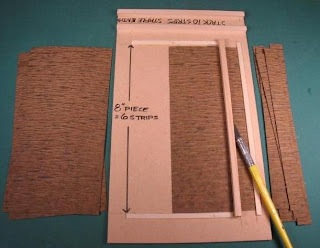 Next, make a simple jig and cut each piece into 5/8” strips. Each piece yields 6 strips. While you’re at it cut some thin strips that are around 1/4“. You’ll need them later. 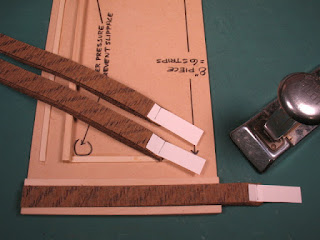 Stack 10 strips together into a neat pack and staple a thin card “pull tab” to the back of one end. So far so good.


NEXT: Cutting slots in the packs.
No comments: