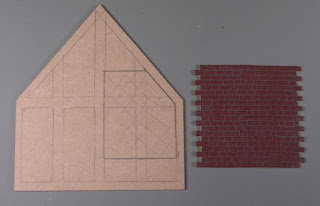 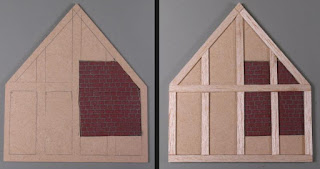 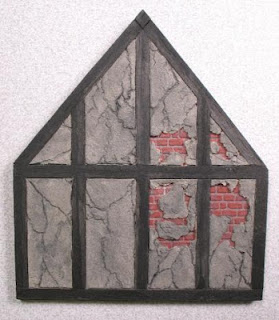 NEXT: Wattle and Daub.
No comments:

Here’s how I cut out window openings in a wall as well as fill in openings with bricks.

- After I cut this end piece, I marked where (W) open windows and (B) bricks were going to be.
- I drilled holes a bit larger than my scroll saw blade, then cut across the timbering lines to the holes. The holes make it easier to rotate the piece around the scroll saw blade when cutting out the wall holes. 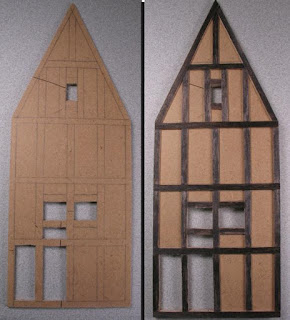 Holes all cut out. The lower left corner is very fragile but becomes MUCH stronger once the timbering has been glued on. I then used a 1/4” square rasp/file to clean up the holes to exact size. 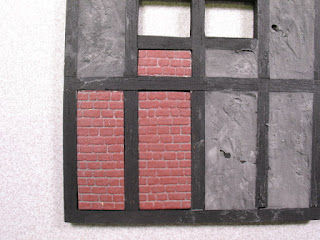 The usual black undercoat, then filler/paint applied but this time I used a small artist‘s trowel instead of using a large putty knife (as in METHODS: Spackling). I like the rougher, less uniform result much more. I then cut some leftover painted Linka castings to size and glued them flush with the front surface. 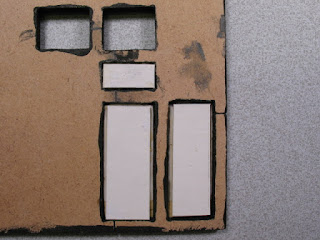 The back: Small pieces of mat board were glued in to raise the surface somewhat… 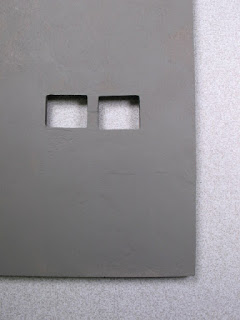 ﻿…and a filler/paint mix was applied to level it. After sanding it all flat, the back was painted neutral gray. Yeah, I should have done a more precise job filling/sanding and filled in that thin little crack between the windows as well. But I didn‘t.

The finished wall for now with a few cracks added using an Xacto knife. I’ll paint it when it gets used on a building whenever.

Next: Inset bricks.
No comments: